Winter is off to a late start this year, with rain storms in the Northeast on New Year's Eve to further rainstorms this week from in the Southern states as shown below: 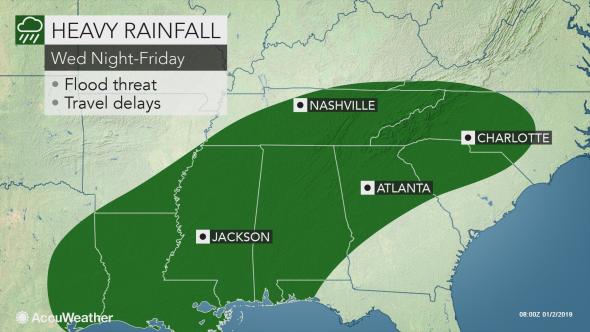 Winter will finally pick up this week in 2019 with snow flurries from the West to East coast.

North - New York was hit with drenching rain just in time for the annual New Year’s Eve celebration. There will also be a chance of rain on Thursday from New York to Connecticut.

South - The Southern Rockies have already experienced their 2nd snow one week. The first few days of 2019 will continue to be snowy from Arizona to New Mexico. Snow and ice will surround the Plains, making these areas difficult for transportation. In New Mexico, snow reached as much as 22 inches this morning for Los Alamos. Almost a foot of snow in just 4 hours fell in Greer, Arizona on New Year’s Eve, starting the Southern Rockies off with a snowy 2019. From Texas to Virginia expect rain from Wednesday to Friday.

East - From Texas to the lower Mississippi Valley, expect a post-Christmas rainfall later this week. Rain can be seen from Texas to Virginia with potential for scattered thunderstorms and flooding. Freezing rain along with a wintry mix from central Texas to Oklahoma can be expected on Thursday.

West - From the Western states to the East, expect a wintry mix. The jet stream will head from West to East beginning from the Southern Plains from Wednesday into Thursday. The Southern Plains will have a mixture of snow which will also affect Arizona to Oklahoma. A Winter storm advisory is issued for New Mexico, Arizona, Texas and Oklahoma.