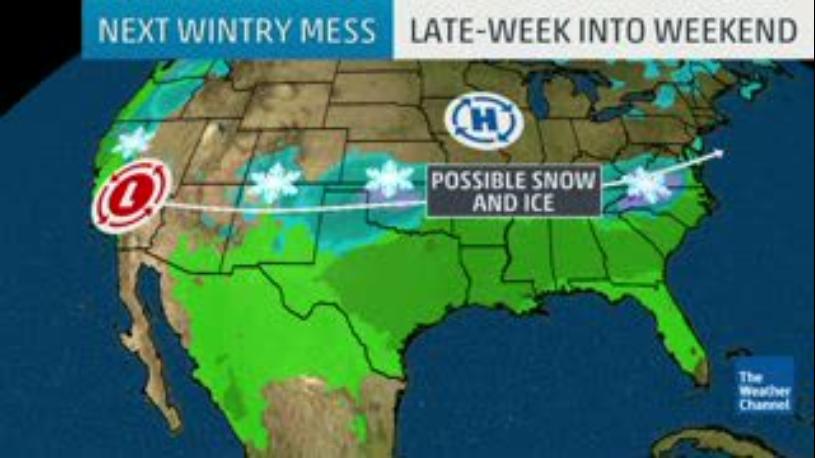 The photo above shows late-week snow into the weekend.

North - Expect snow from upstate New York to Maine towards the end of the week into the weekend.

Midwest - As for the Midwest, 12 tornadoes were reported in central Illinois. Buildings and homes were ripped apart from the strong winds. For the upper midwest, there was nearly 14 inches of snow in Nebraska with near white-out conditions, leaving traffic at a halt. The white-out conditions spread into South Dakota, greatly delaying traffic.

West - A major earthquake in Anchorage, Alaska caused 1,000 aftershocks. The magnitude 7,0 earthquake that happened last week caused smaller aftershocks with a magnitude of less than 2.5. There were luckily no deaths in the major quake, but there was damage to roadways and structural damage to buildings. There are currently many bridges and roadways that are closed in Anchorage that are causing transportation delays. There are also many buildings and homes that have damage. Snow and ice will travel from New Mexico to New Jersey late this week into the weekend. From Northern California to Washington, there will be possible snow and ice this week into the weekend as well. Anticipate travel delays in these areas.

South - In the Florida Panhandle, 9 inches of rain was reported. There is a flash flood and tornado watch from Northern Florida to North Carolina, including Alabama. Expect severe weather in these areas.