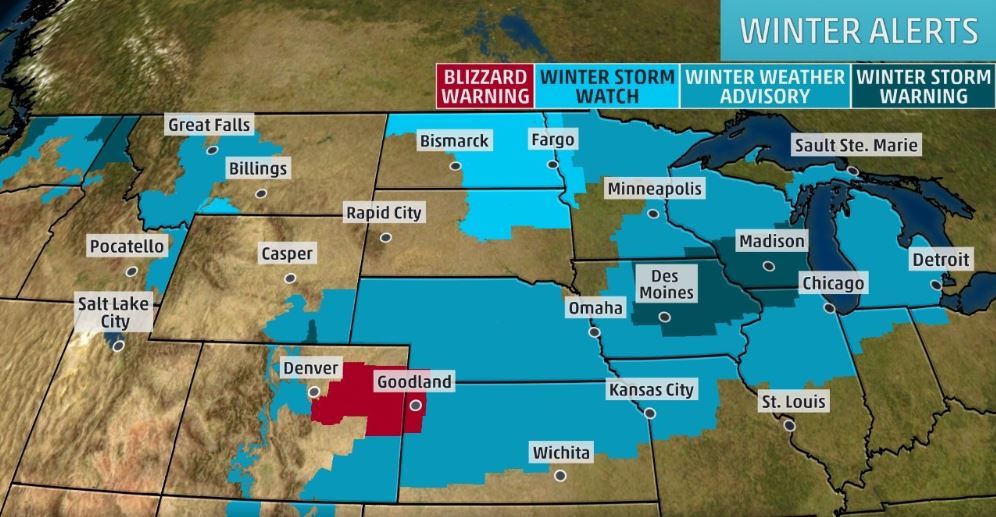 Arctic air across the U.S. is expected to arrive later this week. The Midwest can experience even colder weather than they had on the weekend. Winter Storm Indra will bring snow from the West Coast to the East. There will not be as much snow as Winter Storm Harper, but Indra will add on snow from Harper over the weekend as shown in the photo above.

North - Bitter cold temperatures will move from the Midwest on Friday into the Northeast on Saturday. From Ohio to Maine, expect cold, late-week temperatures.

South - Texas had bouts of heavy rain over the weekend, with parts seeing as much as 8 to 10 inches of rainfall. There will be a flood warning remaining for the river in Evadale, Texas until this Wednesday. Water from Lake Sam Rayburn flooded the bridge on Highway 147 on Saturday, which created dangerous road conditions with the leftover debris. Wind damage around these areas also added to debris, creating tough driving conditions.

West - A blizzard warning is issued for the central high Plains from Kansas to Colorado. Expect to experience snow from Kansas to North Dakota. This morning, there was reported zero visibility snow in Kit Carson County, Colorado. The Colorado DOT shut down a part of Interstate 70, which is East of the Denver International Airport.